The Deschutes County Sheriff’s Posse exists today as uniformed representatives of the Sheriff, but they are not law enforcement personnel and do not enforce laws. The Sheriff's Posse is best known for its high profile in parades and rodeos, and provides community support through various events and fundraisers. The Posse may also assist in the community at many functions such as horse security patrol at local rodeos and fairs and other events. They also provide Search and Rescue services, with the primary emphasis on the use of horses.

History of the "Posse"

One of the oldest services to the English Crown was the Office of the Sheriff. The word "sheriff" can be traced from the Saxon word "Scir-Reeve" or "Gerefa" and the formation of counties or "shires" dates back to Alfred the Great of England. The office of Sheriff was transplanted into America in 1635 where it continues to this day.

Originally the “High” or “shire” reeve’s police responsibility was to preserve the king's peace. He had authority to raise the "hue and cry" for the pursuit of thieves and other criminals. The hue and cry was an early form of the posse, in which once the shout was sounded that a crime such as robbery, theft, assault, or murder had been committed, all who heard it were obligated and bound by honor to join the pursuit until those involved were captured or the reeve called off the search.

That English tradition followed the Sheriff to the New World and it would become a cornerstone of American law enforcement. As well as being a basis of law, it became a stimulus which would capture the imagination of the American people and serve to inspire their will with regards to law and order. It invested the citizens in the law enforcement process and served to extend the office's usefulness by enabling and allowing for unlimited manpower resources at times of greatest need.

Confronted with serious issues of crime, disorder, vice, and violence, the pioneers of the old West turned to members of their communities to enforce order. With a multi-century background and history, the office of Sheriff was a natural addition in this environment. Selection could be made by appointment, or, in most cases, by popular vote from community residents to select a Sheriff. The county-wide jurisdiction of the office fit very nicely in the law enforcement efforts and supervision of the vast countryside. The ability of the Sheriff to respond to the hue and cry and to raise a posse helped greatly with the issues of crime and the isolated nature of the frontier. The office that had evolved over the centuries was a "hand-in-glove fit" for local law enforcement in the Wild West.

The American posse would become a mainstay of law enforcement efforts in the years to follow. It would be employed to a great extent in the American Wild West period as a regular tool of marshals and sheriffs. The concept of the American posse would become romanticized in dime store novels and newspapers throughout the era. In later years, it would again be romanticized in movies and television programs. The posse continues to be used in contemporary terms and still serves useful law enforcement purposes in many parts of the United States. 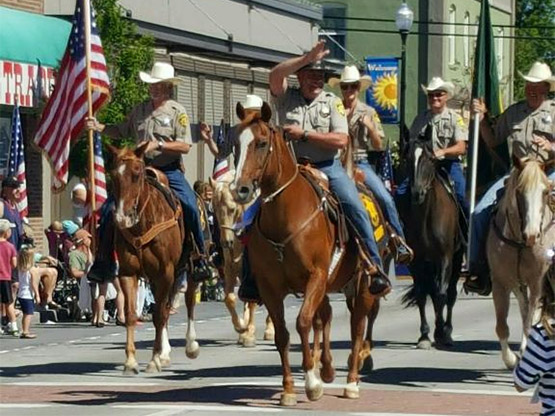